A Place of Innovation

Because Jewish doctors were largely excluded from prominent positions at research hospitals in the United States, Sinai Hospital served as an incubator for the best Jewish minds and became a center for groundbreaking research, innovation, and treatments rarely found in other community hospitals.

Dr. Benjamin Abeshouse developed a new procedure for revascularizing the kidney at Sinai Hospital in 1957. 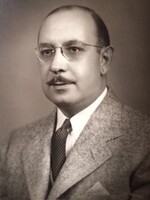 A portrait of Dr. Benjamin Abeshouse, Chief of Urology at Sinai Hospital.

In 1957, Sinai’s Chief of Urology, Dr. Benjamin Abeshouse, developed a new operation for revascularization, restoring blood-flow through the circulatory system of the kidney. Dr. Abeshouse’s procedure used a portion of the intestine to substitute for blood vessels within the kidney. Dr. Robert Goldstein and Dr. George Abeshouse, residents at Sinai Hospital, assisted in the research for this breakthrough.

In 1980 Drs. Michel Mirowski and Morton Mower co-developed the Automatic Implantable Cardioverter-Defibrillator (AICD). It automatically senses the potentially deadly erratic beating called ventricular fibrillation and shocks the heart back to its normal rhythm. The AICD performs the same function as the bulky defibrillator with paddles used in emergency rooms. After the Food and Drug Administration approved its use, the AICD was adopted world-wide. 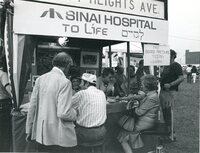 The blood pressure and weighing booth at Baltimore's Jewish American Festival is one example of Sinai's historical commitment to taking health and wellness programming into the community.

Sinai Hospital has strived to develop comprehensive methods to meet the needs of the diverse community of Northwest Baltimore. This includes free eye clinics, mobile programs to combat childhood obesity, and telemedicine options. In 1961 Dr. Frank Furstenberg, director of Sinai Hospital's Outpatient Department, created Maryland's first home health care program. The goals of these community programs have been to increase awareness and access to health care.

The Precice limb lengthening nail, co-developed at Sinai Hospital, is inserted into the bone and slowly lengthens the limb using an internal, remote-controlled motor. This version of the nail is used for lengthening the femur.

The International Center for Limb Lengthening, which opened in 2001 as part of the Rubin Institute for Advanced Orthopedics, is recognized around the world for its innovative treatments for Perthes disease, clubfoot, congenital femoral deficiency, fibular hemimelia, bone infection, brachymetatarsia, bunions and deformities associated with achondroplasia. The center uses cutting-edge technology and the latest proven techniques to treat patients’ complex orthopedic conditions. As an example, Sinai doctors John Herzenberg and Shawn Standard helped co-develop the Precice internal limb-lengthening nail, which has revolutionized limb lengthening. Previously, doctors lengthened limbs by passing external pins and wires through bone, skin, and muscles. 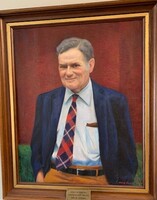 Dr. Arnold Seligman served as Chief of Surgery and was renowned for his pioneering work in histochemistry, which analyzes the composition of cells and tissue in the body.

Chief of Surgery and Chief of Research Oncology and Cell Biology Dr. Arnold Seligman is known internationally as the father of histochemistry, for which he earned a Nobel Prize nomination. Histochemistry is the branch of chemistry that analyzes the composition of cells and tissue within the body. Dr. Seligman conducted his research on chemotherapeutic agents as well as co-developed a technique for treating congenital biliary atresia that expanded the bile ducts of the liver. He was the first surgeon named by the American Cancer Society as a lifetime professor of research oncology and cell biology.

An electrocardiogram shows the AICD shocking the heart to resume normal rhythm. 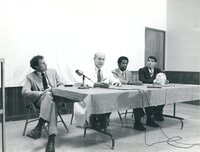 The anticipated delivery of a hydrocephalic baby and her twin prompted cooperation between doctors at Sinai and Johns Hopkins. From the left are Drs. John Strauss, Phillip Goldstein (Chief of Obstetrics at Sinai), Ben Carson (Hopkins pediatric neurosurgeon), and David Zisow. 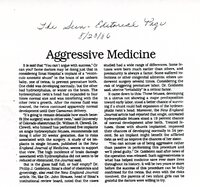 Sinai doctors undertook the complex procedure of implanting a shunt in the brain of an unborn baby with hydrocephalus, increasing the chances of survivability of the baby and her twin. 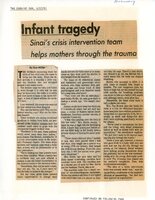 Committed to the total care of all patients, Sinai established a multidisciplinary crisis intervention team to help parents when tragedy strikes. 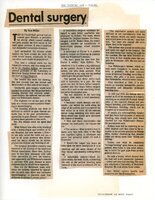 Newsweek lauded Drs. Mirowski and Mower for their development of the AICD, an implantable unit the size of a cigarette pack. 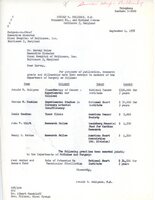 The Department of Surgery in 1958 had three grants and two fellowships, one of which was for experimental chemotherapy. 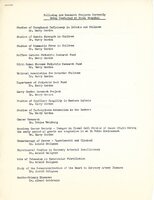 Even as a community hospital, Sinai has maintained a robust research agenda throughout the years.

Dr. B. Stanley Cohen, Sinai's Chief of Rehabilitation Medicine, led a committee to study the vocational rehabilitation facilities for disabled Baltimore residents in 1967. 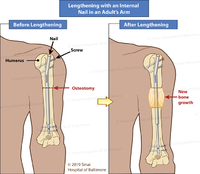 These diagrams show how the internal Precice nail is used to lengthen the humerus, femur, and tibia.

More from the Digital Archive